Both light sources need to have the ability to power up and power down billions of times every second while also being able to cast a nearly infinitesimal light beam into an optical fiber. While optical signals are being exchanged, both light sources need to be turned on and off quickly and properly for the signals to channel and communicate correctly and thoroughly. 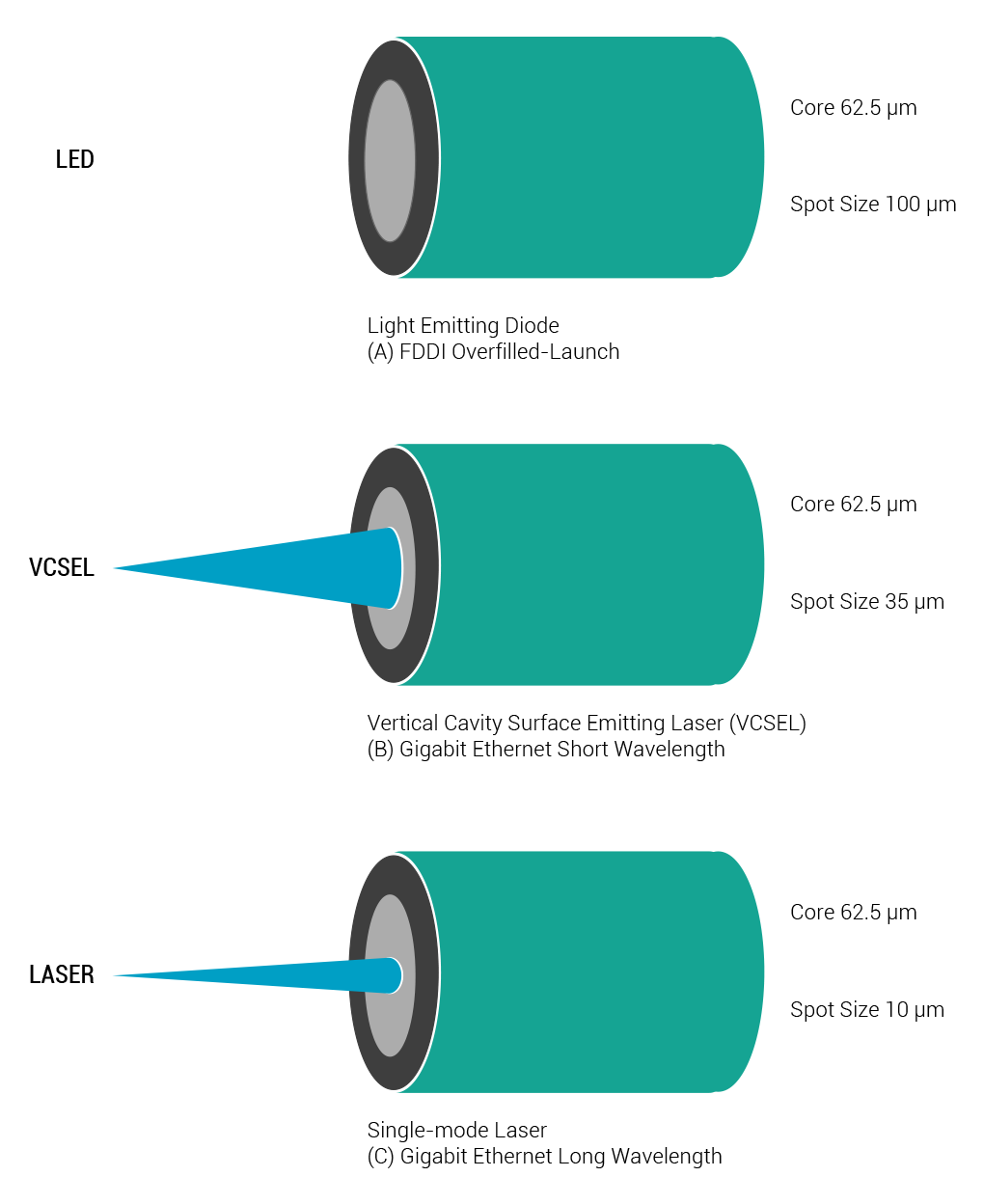 LED fiber optic light sources are comprised of components that impact the light wavelengths released. The components of a primary LED power source are a semiconductor diode containing an “N” Region and a “P” Region. Electric current only flows through the LED when it is forward biased. Once the current flows through the LED, sporadic photons release at the intersection point of the “P” and “N” Regions. LEDs that discharge between 820 to 870 nm are normally classified as gallium aluminum arsenide (GaAIAs). Like LEDs, lasers are also semiconductor diodes with “P” and “N” Regions, however lasers give stimulated discharges opposed to the simplex impulsive releases like LEDs do. The major difference between laser and LED is that while laser depends on an optical cavity for longevity, LED does not possess the same need. By splitting the opposing end of the chip, the cavity forms, which provides extremely symmetrical, reflective, mirror-like finishes.

Vertical-Cavity Surface-Emitting Laser, otherwise simplified as VSECL, is a common laser source used for high speed networking. It is comprised of two oppositely-doped Distributed Bragg Reflectors (DBR) that contain a cavity layer in between them. It fuses increased bandwidth and decreased cost to make an ideal solution for gigabit networking. Vertical light emitting lasers originated in the mid to late 70s as a solution to the planarization limitations of the integrated photonics that were available in microelectronic technology at that time. More recently, aside from use in optical fiber data transmission, these lasers have also been used for other applications, including analog broadband signal transmission, absorption spectroscopy (TDLAS), laser printers, biological tissue analysis, computer mouse, and chip scale atomic clocks, just to name a few.

Generic contrasts are that LEDS, or Light-Emitting Diodes, are the default power light source. Usually, laser light power sources, such as a gas lasers, are used for special cases. Although lasers are not as commonly used, they do provide more power and function at higher speed levels than LEDs. They have better accuracy while channeling light over a wider distance. Moreover, considering cost, lasers have a higher price tag than LEDs.

Due to material dispersion, many wavelengths flow through a fiber at various velocities. It is important to note that LED and Laser do not emit singular wavelengths, but instead a range of wavelengths called the spectral width of the source. The fiber optic power meter and fiber optic light source work hand in hand at all times. Throughout the working process, it creates beams of light that aim directly down the center of the slim single mode core to project in a single mode transition.